Radio-controlled jet aircrafts are gaining huge popularity as they are the closest to the real thing. Many generations of boys grew up on movies like Top Gun all we all have to admit, we just love jet planes especially fighter jets. To become a pilot of a fighter jet is super hard, and there are only a few capable of becoming one. For the rest of us, the best we can do when it comes to piloting a jet is to get an RC one. RC drones are a small flying machine that is controlled remotely from the ground using a hand-held radio transmitter. Flying RC aircraft as a hobby grew substantially from the 2000s because planes became cheaper, they got more advanced with more capable motors, batteries, and electronics. There is a huge variety of models and styles available nowadays. These models are so advanced that even government and military organizations are using them for many experiments. 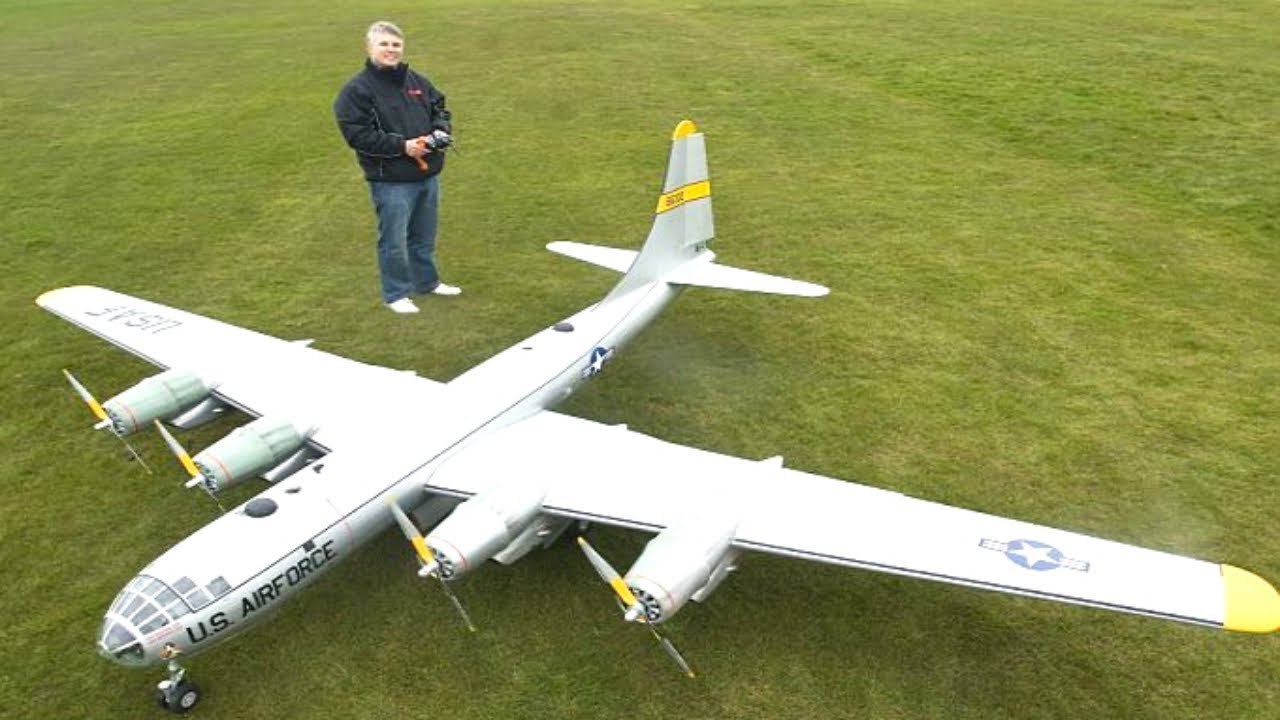 When it comes to RC jets you can find a small-scaled functional replica of any popular real model, from fighter jet to commercial jumbo jets. They can be very expensive, but you can also find some for a reasonable price. They use a microturbine or ducted fan for power and propulsion, and frames are constructed from carbon fiber or fiberglass. Their fuel tanks are made from Kevlar, and turbines are using propane for a start before they ignite solenoid jet fuel. In order to successfully fly one, you need to have great skills and greater reflexes as they reach speed up to 320 km/h which is equivalent to 200 mph.

The Best RC jet: our pick

If you are looking for a recommendation for the best RC jet then we are naming F-14 Tomcat Twin as probably the best overall RC jet plane. It is a two-seater fighter jet that has two turbines and twin tails that are providing an unforgettable experience. The great thing about it is that it’s made from EPO foam which makes it crash resistant, which is great if you don’t have the expert skillset. 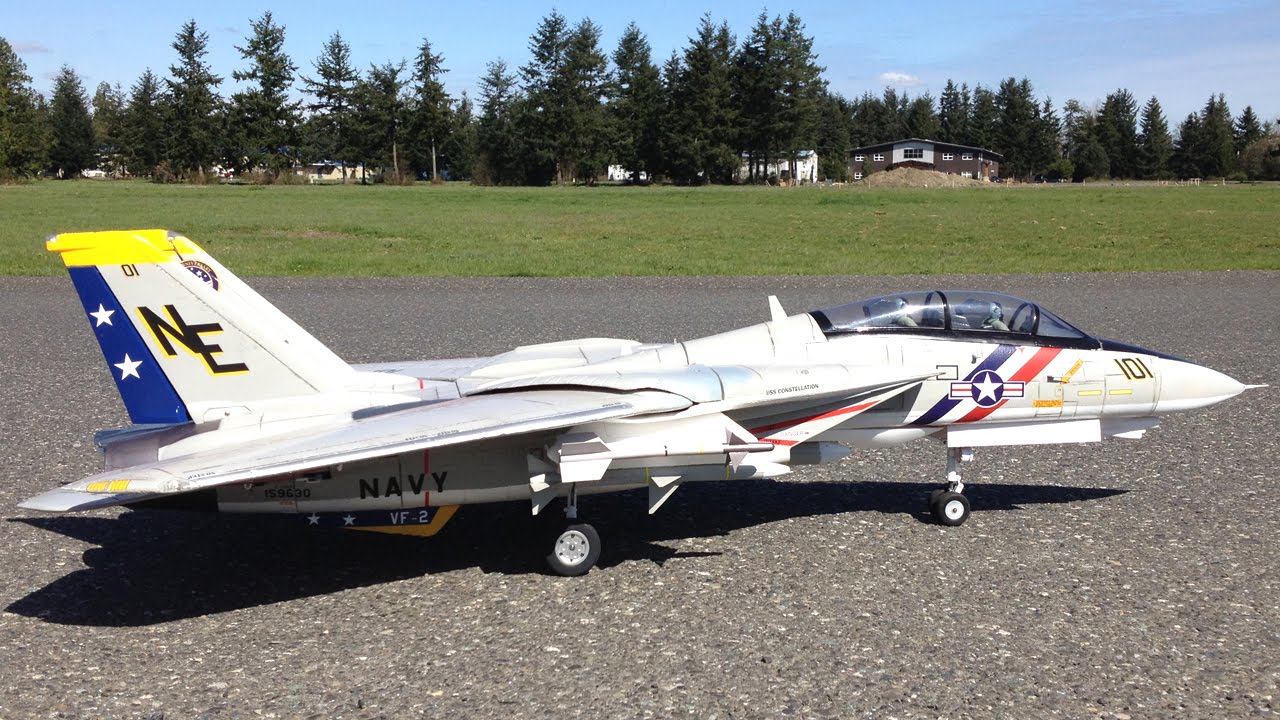 Everything you need to know about jet engine

A jet engine is a powerful machine that creates a pushing force called trust with energy-rich liquid fuel. That trust pushes a plane forward and forces the air past it’s especially and scientifically shaped wings in order to create an upward force. Without that force, the plane would not be able to fly into the sky, and the name of that force is a lift. 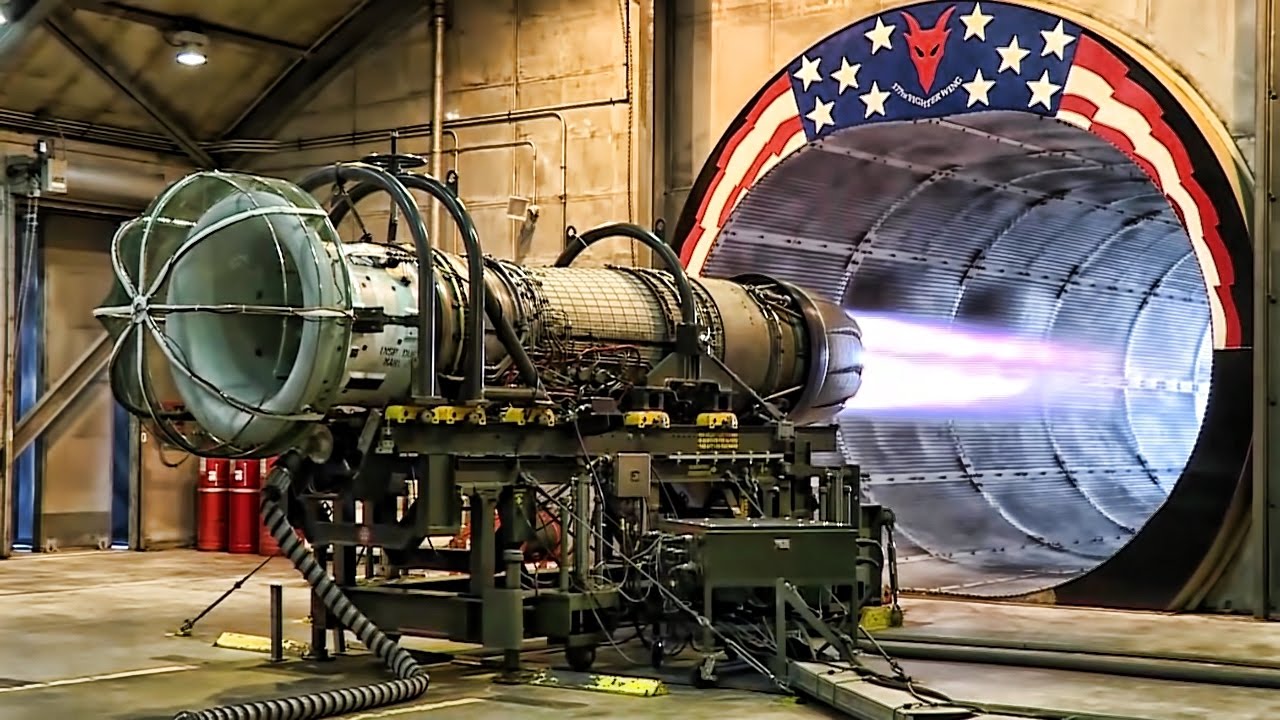 How does the jet engine work?

Jet engine, just like a car engine, has the same scientific principle. It burns fuel with air which is called combustion, and by that, it releases energy that powers not only a plane but any vehicle or machine that is using the jet engines. The difference between a car engine and a jet engine is that jet engine instead of cylinders uses a long metal tube that does the same for like cylinders in the care but in a straight line sequence. Simplest of the jet engines are the turbojet and he is working on this principle: air is drawn in at the front and compressed by the fan, then it is mixed with the fuel and combusted, in the end, you have exhaust where the hot air is fired out. 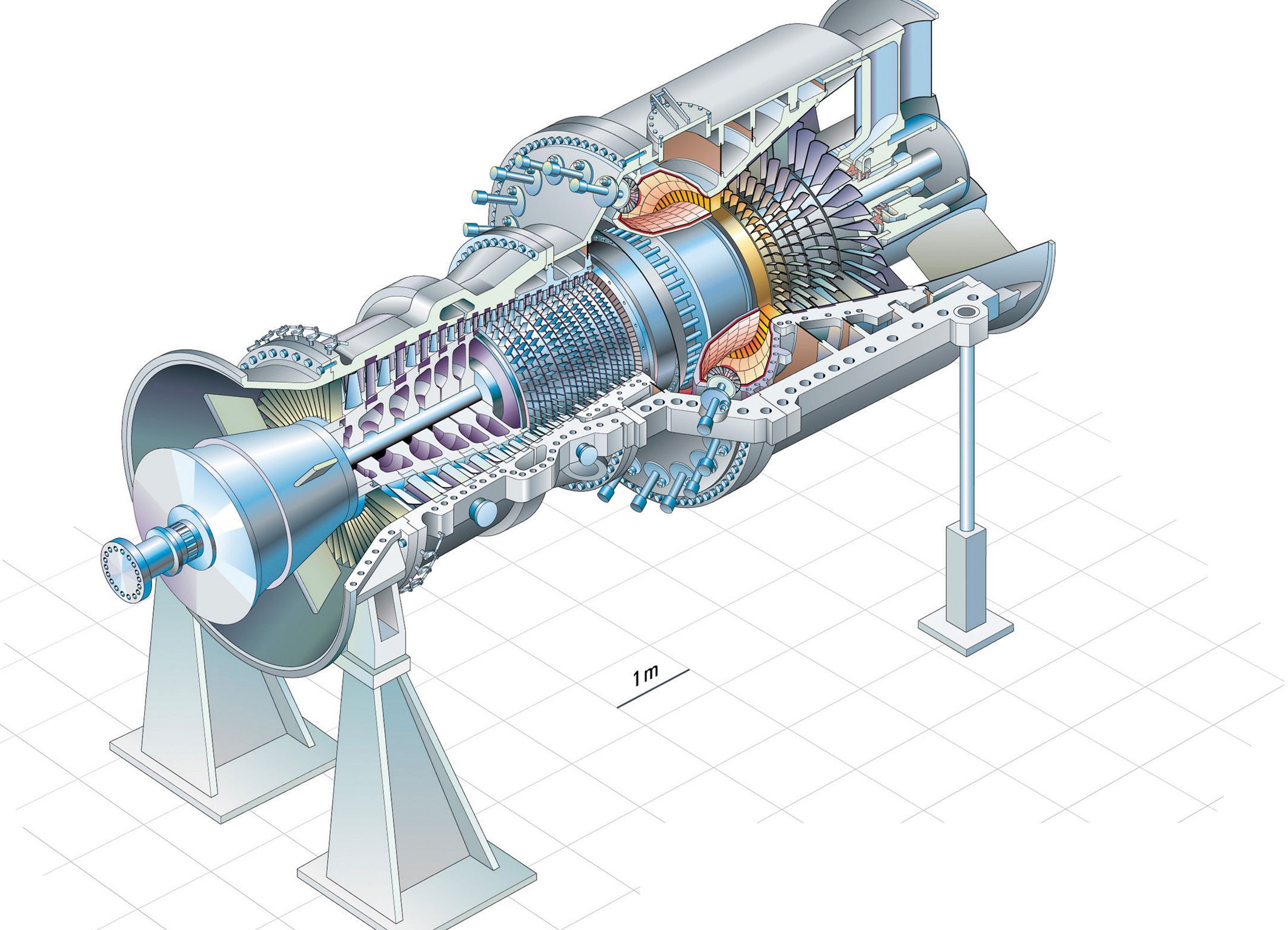 If we are going to be more technical we must say that proper terminology for the jet engine would be a gas turbine. It just better explains how an engine really works, it burns the fuel in the air and releases hot exhaust gas. A jet engine forces the gas past the blades on a spinning wheel and makes them rotate, which means that jet engine exhaust gas that powers a turbine.

Our first thought when thinking of jet engines is rocket-like tubes that fire exhaust gas backward. We are basically thinking of action and reaction, which is Newton’s third law of motion, and it, tells us that when a jet engine’s exhaust gas shoots back the plane must move forward. The action, in this case, is the force of the exhaust and it is equal and opposite to the reaction-plane moving forward. The truth is that not all jet engines work this way! Most of them harness the power of the engine by the turbine, and the shaft attached to the turbine is used to power a propeller that can be seen on the airplane, a rotor blade in the helicopter or a drone with long range.

Jet engines are typically used in aircraft, cruise missiles, and other unmanned aerial vehicles. Some of them are used for high-speed cars, especially drag racers and they are holding the record for the highest speed cars. In the form of the rocket engines, they power military missiles, model rocketry, and spaceflight. 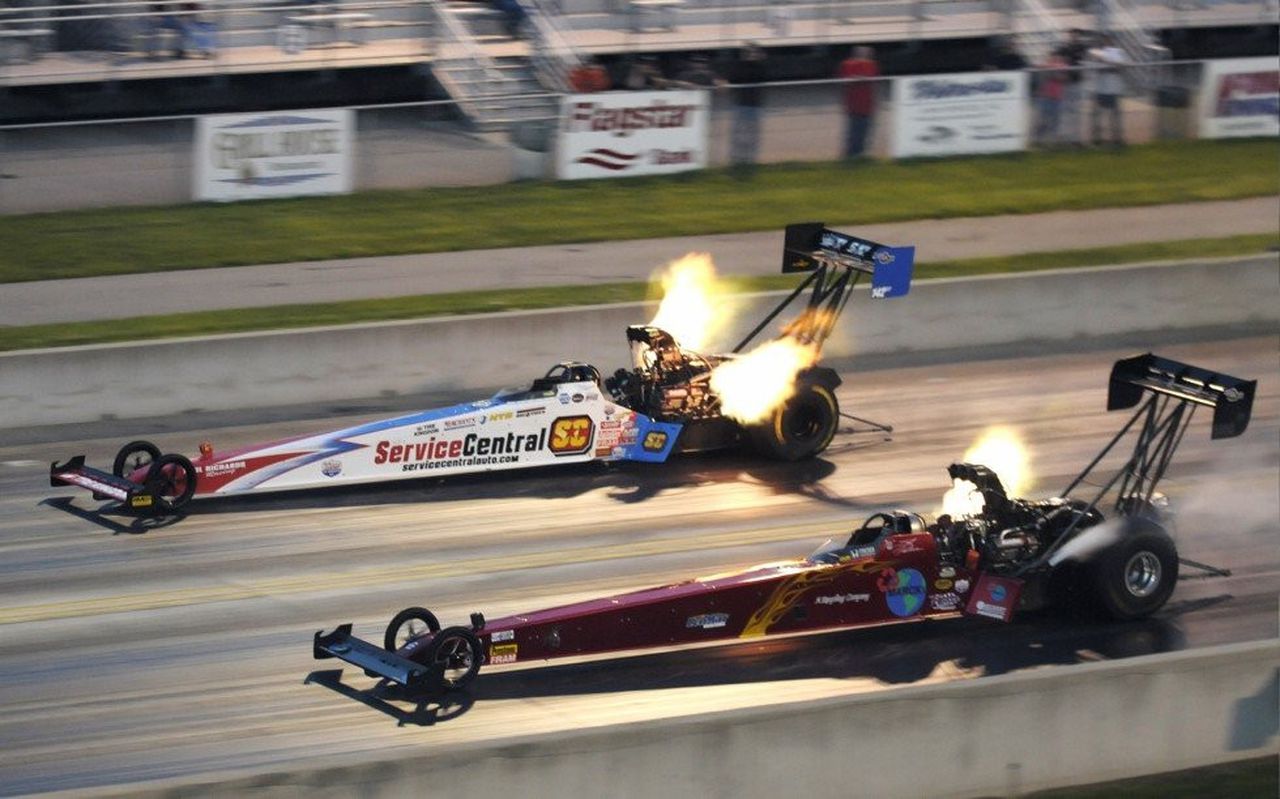 Jet engine designs modified are also used for many non-military purposes and applications. They are used for industrial gas turbines, marine power plants, electrical power generation, powering water, natural gas, and they are providing propulsion for locomotives and ships.

There are many different types of jet engines, but all the jet engines and gas turbines work in the broadly same way. The concept we already learned, they pull air through an inlet, compress it, combust it with the fuel and allowing the exhaust to expand through a turbine. They all share five key components: an inlet, a compressor, a combustion chamber, and a turbine. The differences in the type of jet engines are in extra components, inlets working in different ways, number of combustion chambers, and compressors and they might have multiple turbines. When it comes to the development of different jet engine type engineer have a difficult job of developing an engine that is small, light, quiet, and that they consume minimum fuel with maximum efficiency and power.

Turbojet is the simplest type of jet engine based on a gas turbine; it moves a plane forward by firing a hot jet of exhaust backward. The role of the turbine in the turbojet is plain and simple; they need to power the compressor, so it takes little energy away from the exhaust jet. They are basic, widely used in airplanes today, general-purpose jet engines that produce a steady amount of power at all the time. They are perfect engines for small, low-speed planes that have a basic role.

Turboshaft engines are the slowest jet engines, and they mainly power helicopters. They are designed to operate for substantial periods of time hovering at zero flight speed, just like a long flight time drone, and they actually don’t have that much of a need for high speeds. Even in forward flight, they rarely exceed 240 kilometers per hour which is equivalent to 0.22 Mach speed. A common mistake that we all made when thinking of helicopters is that they use similar types of engines like airplanes. They have those robust rotors on top but those rotors are powered by one or even two gas turbine engines called turboshafts. The difference between turbojet and turboshaft is that the turboshaft produces relatively little trust. Besides helicopters, they are used in train engines, tanks, power plants, and boats. 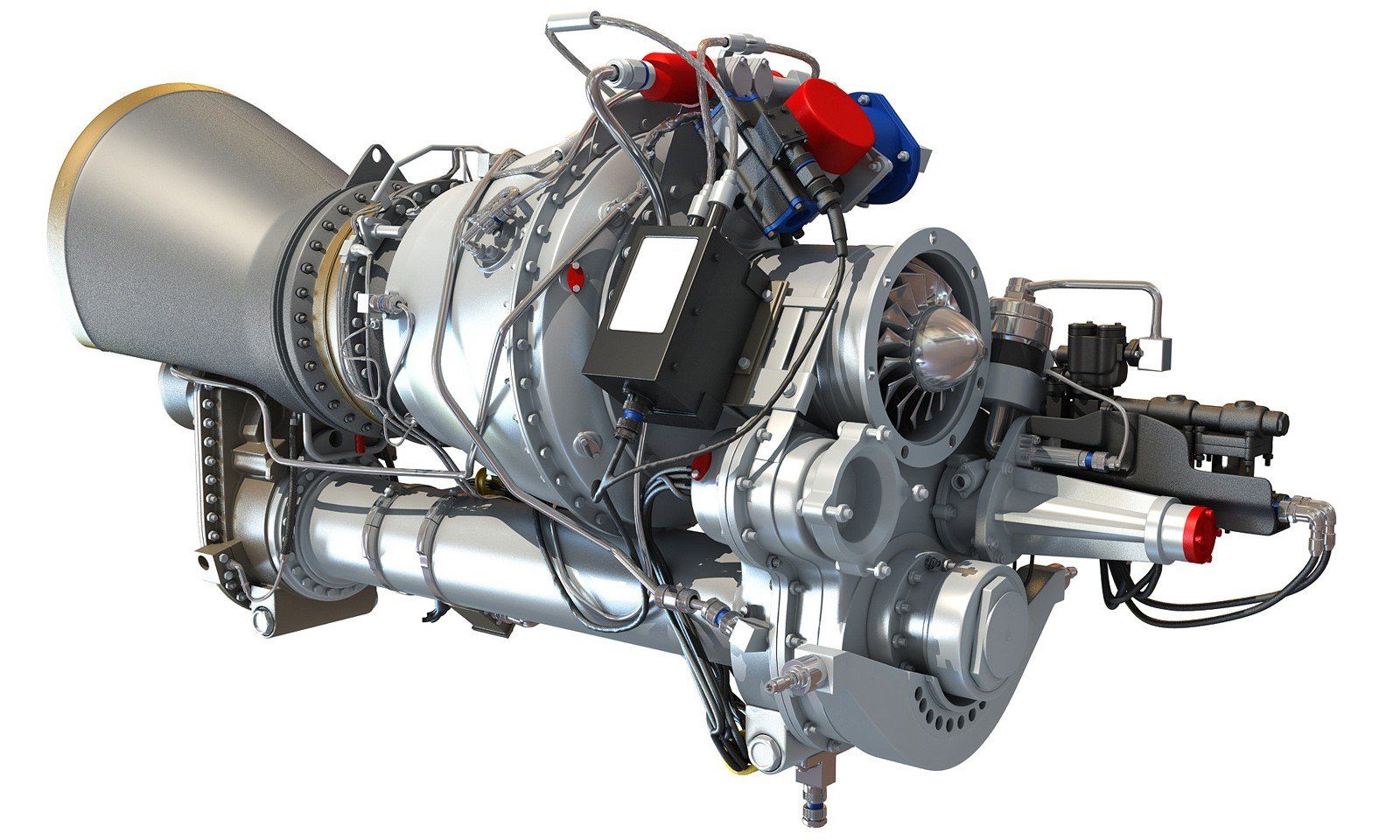 You can find turboprops in modern planes with a propeller; they typically use that type of engine. With the flight speed raging between Mach 0.2 to 0.7 they occupy the next band of flight speed in the flight spectrum. It’s similar to the turboshaft in a helicopter, but the propulsor is a propeller with a higher discharge or jet velocity than that of the helicopter rotor. The visual difference is obvious, the engine doesn’t power an overhead rotor, it powers a propeller mounted on the front and that propeller is pushing the plane forward. Turboprop does produce trust from its exhaust gas, but the majority of the trust comes from the propeller. Propeller driver planes fly more slowly and that makes them very efficient for use in cargo planes and other small, light aircraft. The reason why they don’t waste that much fuel is that they waste less energy fighting air resistance. The negative side of a turboprop is that propellers create a lot of air resistance themselves. 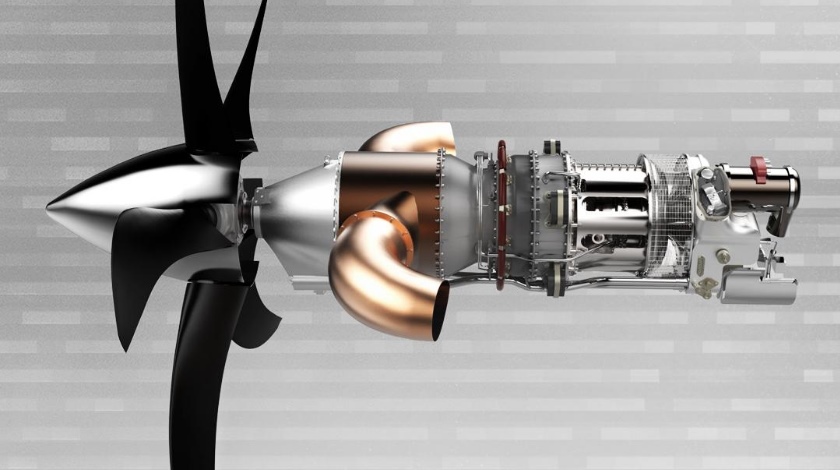 Turbofans have impressive power and efficiency, and that makes them an engine of choice form many purposes, from passenger jets to fighter jets. Those huge fans mounted on the front of the giant passenger jets are-turbofans. They work as super-efficient propellers, and they work in two ways; they increase the air that flows through the core of the engine and blows some air around the outside of the main engine. The result is that they produce more trust with the same fuel, and they are producing a backdraft of air like a propeller. Turbofan produces thrust partly like a turbojet and partly like a turboprop. 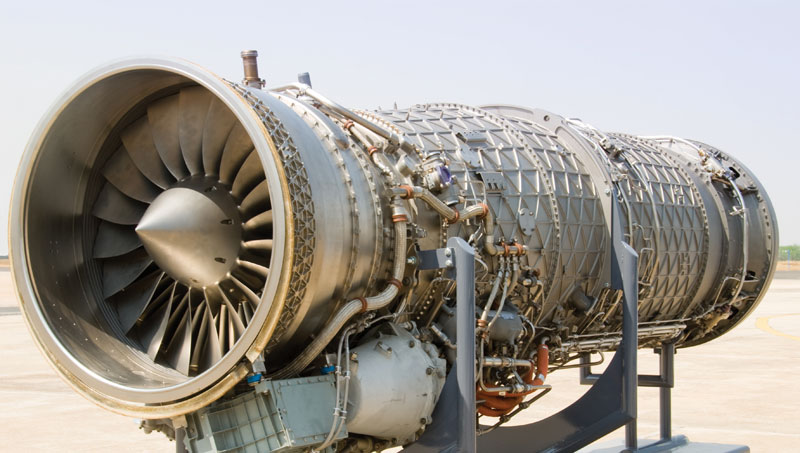 Ramjets and scramjets are engines reserved for high supersonic or hypersonic flights. They both have fewer parts than a turbine engine because they use the forward speed of the aircraft to compress the incoming air. Ramjets are not suitable for vehicles that must be sufficiently self-powered for a takeoff, clime, or acceleration since they don’t produce a sufficient amount of trust, so they need an alternative propulsion device. They are mostly used on rocket and missile engines but they are not usable in space since they need air to run the engine. Ramjet engines compress and slow down air when it enters the engine from sound of speed to subsonic speed, and then after mixing with fuel is ignited by a device called a flame holder. The difference between ramjet and scramjet is that scramjets don’t slow down the air in the engine, and the air goes out at much higher speed allowing the plane to go faster than one with the ramjet. In theory, scramjet can go up to Mach 15.